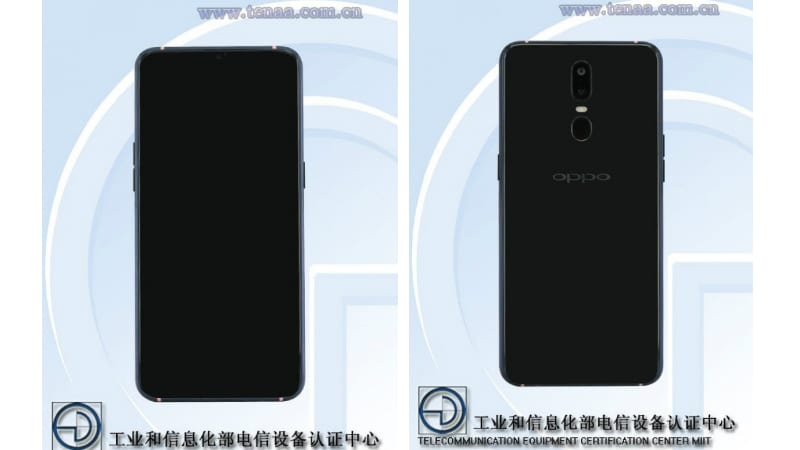 Oppo clearly doesn’t believe in the trade-norm of an annual refresh cycle. The company is at the brink of launching the Oppo F9, successor to the Oppo F7 launched in March this year, and now a TENAA listing suggests that it is planning to do the same with its R series. After launching the Oppo R15 in March this year as well, the Oppo R17leaks have already started to surface. Now, the smartphone has been spotted on TENAA, asserting that its launch is near. The Oppo R17 was also spotted at a promotional event in China, hinting that the company has already begun marketing the device in its home market.

The alleged Oppo R17 TENAA listing shows two model numbers – PBEM00 and PBET00. The photos listed show the front display, however the water drop notch seen in previous leaks is not clearly visible. At the back is a vertical dual camera setup with the fingerprint sensor sitting beneath it. The power button sits on the right edge while the volume rockers sit on the left edge of the smartphone. Unfortunately, full specifications are not listed yet, but the site does reveal that the Oppo R17 sports a 6.4-inch display, 3,415mAh battery, and dimensions are at 157.5×74.9.7.5mm. The Oppo R17 looks to have a glass back and metal edges.

A previous leak hints at a waterdrop display notch, and negligible bezels on all other sides. The big highlight of the Oppo R17 is expected to be its 10GB RAM support, making it the first smartphone to achieve the feat. According to previous leak, it will also sport a 4K OLED display with 92.9 percent screen-to-body ratio.