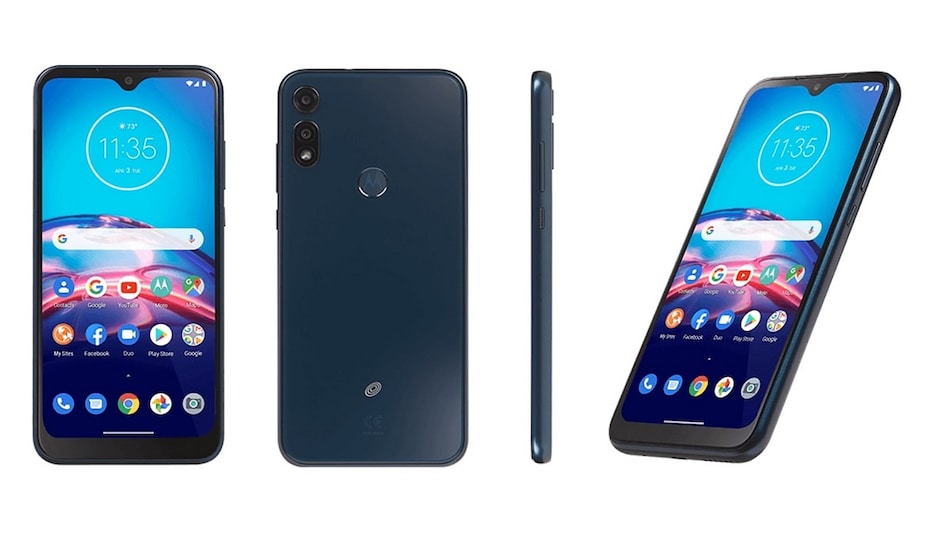 Moto E7 renders and specifications have leaked online showing of the design and internals. The Moto E7 Plus was launched in India last month as an entry level smartphone with a price tag of Rs. 9,499. While Motorola has not shared pricing for the Moto E7, it will most likely be cheaper than the Plus variant. Key specifications of the Moto E7 have leaked in the past as well and the latest leak offers some additional information.

The Moto E7, as per the report by DealNTech, citing an online retailer listing, is said to run on Android 10 out of the box. The phone may feature a 6.2-inch HD+ (720×1,520 pixels) display with relatively thick bezels all around and a notch for the selfie camera. The processor for the Moto E7 has not been featured in the leak, but it may come in a 2GB RAM + 32GB storage configuration.

In terms of optics, the Moto E7 is expected to come with a dual rear camera setup that includes a 13-megapixel primary sensor and a 2-megapixel secondary sensor. On the front, there is said to be a 5-megapixel shooter inside the notch. The battery is said to be 3,550mAh and the listing states that it can deliver 2-days of battery life on a single charge. Connectivity options include 3.5mm headphone jack, Wi-Fi, LTE, GPS, and Bluetooth. There is also a fingerprint scanner on the back of the Moto E7.

The Moto E7 renders that leaked with the listing show a blue back panel with Micro-USB port, vertically aligned rear cameras and flash, and the headphone jack on top of the phone.

Interestingly, back in August, a phone believed to be the Moto E7 was reportedly spotted in a US FCC listing with 5,000mAh battery and 10W charging. At the time, it was listed on a Spanish retailer’s website with 4GB of RAM and 64GB of storage, and a price tag of EUR 148 (roughly Rs. 12,700). Another conflicting piece of information came from the TUV Rheinland certification that mentioned a 4,850mAh battery.

Motorola has not shared any details on the Moto E7 and the pricing, as well as availability, is unclear. However, the phone has shown up in multiple certifications and retailer listings in the past, suggesting that a launch can be expected in the near future.