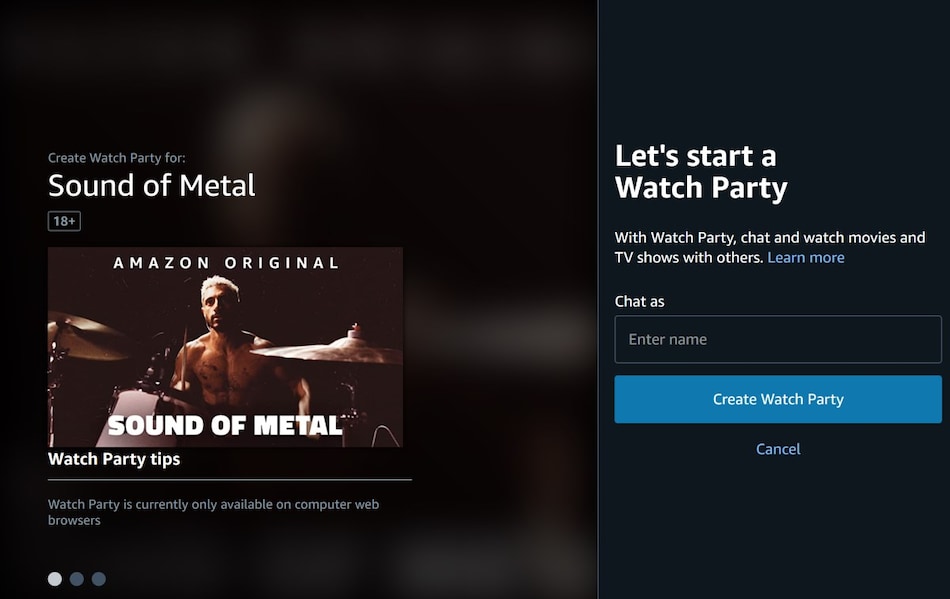 Time to drum up an Amazon Party!

Amazon Prime Video’s “Watch Party” feature — similar to how the third-party Netflix Party extension works — is now available in India. “Watch Party” allows you to stream a Prime Video title with up to 100 friends and family members (as long as everyone involved also has an Amazon Prime membership) and chat with them in a sidebar. Amazon takes care of video and audio synchronisation, all you have to do is pick a title (and get the popcorn). With this, Amazon becomes the first major streaming platform in India to come up with a group watch feature of its own, that works everywhere.

To get started, head over to primevideo.com in a Web browser. Amazon’s “Watch Party” is currently limited to computer browsers such as Chrome and Firefox. (Safari and Internet Explorer are not supported.) Once you’re logged in, find the title you’re interested in watching with others. On the title page, you should see a Watch Party button (as below). For TV shows, the Watch Party button is also available next to every individual episode. Once you click Watch Party, you will be asked to select a chat name before you can hit Create Watch Party (as above). You’ll be then given a link you can share with others.

Your friends and family have to be using a computer browser as well, to join your Amazon Prime Video “Watch Party”. The person who created the Watch Party will have access to video controls, including pause, play, rewind, and fast forward, Amazon notes. This is unlike Netflix Party, where everyone on the stream can pause, play, rewind, and fast forward. But with Amazon’s “Watch Party”, the only control for participants is your choice of audio and subtitle language. This isn’t possible with Netflix Party, because the browser extension has not been made by Netflix itself.

Amazon originally rolled out “Watch Party” in the US back in July. If you are hoping to watch Prime Video with your friends and family in the US, you’ll be disappointed to know that — unlike Netflix Party — Amazon’s “Watch Party” doesn’t work across borders.